After the « 85 Cultural Trend of Thought », I was influenced by the « 20th Century Philosophy Translation Collection » and other series of philosophical/theoretical works, and I began to intervene in the thinking and creation of contemporary art. As an artist, one conveys one’s mental image through objects to make an eternal art symbol. In short, ideas, agility, aura, growth, and flow all go round and round, forming an endless view of the universe and my creation.

My work is based on the background of Eastern and Western cultural considerations. The early meticulous painting « Symmetry Series » looks for the symmetry and break of the dual unity of the schema; « The Spiritual Home of Simon Bowa » explores the oriental expressions of existentialism and feminism in Western philosophy; « Tian Jiu Di Ba » starts from the mathematics of « the law is based on yin and yang, and is based on the number of techniques », and explains « the chance of rationality »; In time and space; « Wheel System » juxtaposes the ancient pottery cart technology and modern Lego toys, and uses rotation to condense the dialogue between technology and art, teaching and games, past and future. 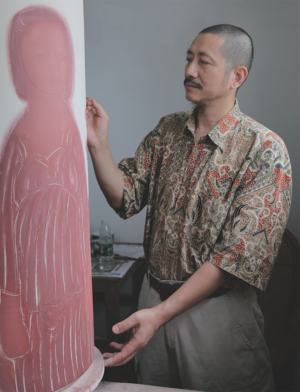